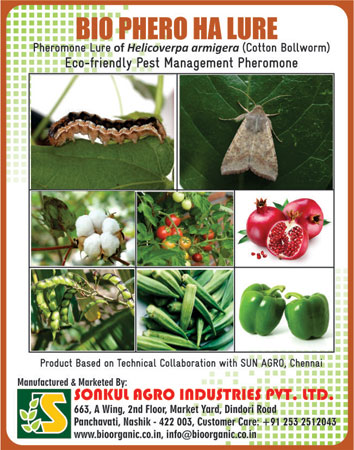 One pheromone lure of Helicoverpa aemigera

The cotton bollworm is variable in both size and colour. The body length varies between 12 millimeters (0.47 in) and 20 millimeters (0.79 in) with a wingspan of 30–40 millimeters (1.2–1.6 in). The forewings are yellowish to orange in females and greenish-gray in males, with a slightly darker transversal band in the distal third. The external transversal and sub marginal lines and the reniform spot are diffused. The hind wings are a pale yellow with a narrow brown band at the external edge and a dark round spot in the middle.

The female cotton bollworm can lay several hundred eggs, distributed on various parts of the plant. Under favourable conditions, the eggs can hatch into larvae within three days and the whole life cycle can be completed in just over a month. The eggs are spherical, 0.4 to 0.6 mm in diameter and have a costate surface. They are white, later becoming greenish.

The larva takes 13 to 22 days to develop, reaching up to 40 mm in length in the sixth instar. Their colouring is variable but mostly greenish and yellow to red-brown. The head is yellow with several spots. Three dark stripes extend along the dorsal side and one yellow light stripe is situated under the spiracles on the lateral side. The ventral parts of the larvae are pale. They are rather aggressive, occasionally carnivorous and may even cannibalise each other. If disturbed, they fall from the plant and curl up on the ground. The pupae develop inside a silken cocoon over 10 to 15 days in soil at a depth of 4–10 centimeters (1.6–3.9 in), or in cotton bolls or maize ears.

Adult moth wingspan is 30-45 mm. The forewings are brownish or reddish-brown (females) or dull greenish to yellow or light brown (males). Hind wings are pale with a broad, dark outer margin. H. armigera moths have a pale patch near the centre of this dark region. Moths feed on nectar and live for around 10 days. Females lay around 1000 eggs in singles or clusters on growing points, leaves, flower buds, flowers and developing fruits, and sometimes on stems. Moths tend to lay eggs on the top third of healthy plants and on vigorously growing terminals.

Cotton : Bore holes are visible at the base of flower buds, the latter being hollowed out. Bracteoles are spread out and curled downwards. Leaves and shoots may also be consumed by larvae. Larger larvae bore into maturing green bolls; young bolls fall after larval damage. Adults lay fewer eggs on smooth-leaved varieties.

Tomato : Young fruits are invaded and fall; larger larvae may bore into older fruits. Secondary infections by other organisms lead to rotting.

Maize: Eggs are laid on the silks, larvae invade the cobs and developing grain is consumed.

Okra : The young larvae on hatching feed on foliage for some time and later bore into the fruits with their bodies hanging outside.

Grapes : Insects feed on grapevine leaves, roots, flowers / berries and shoots are the most destructive. Secondary bacterial infections are common.