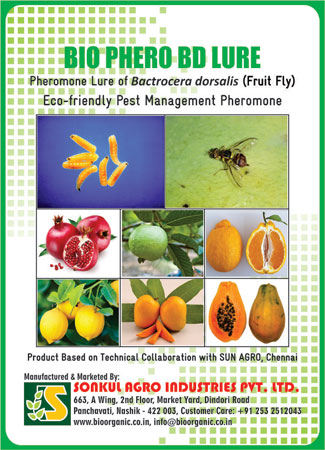 One pheromone lure of Batrocera dorsalis

The adult, which is noticeably larger than a house fly, has a body length of about 8.0 mm; the wing is about 7.3 mm in length and is mostly hyaline. The color of the fly is very variable, but there are prominent yellow and dark brown to black markings on the thorax. Generally, the abdomen has two horizontal black stripes and a longitudinal median stripe extending from the base of the third segment to the apex of the abdomen. These markings may form a T-shaped pattern, but the pattern varies considerably. The ovipositor is very slender and sharply pointed.

Development from egg to adult under summer conditions requires about 16 days. The mature larva emerges from the fruit, drops to the ground, and forms a tan to dark brown puparium. Pupation occurs in the soil. About nine days are required for attainment of sexual maturity after the adult fly emerges. The developmental periods may be extended considerably by cool weather. Under optimum conditions, a female can lay more than 3,000 eggs during her lifetime, but under field conditions from 1,200 to 1,500 eggs per female is considered to be the usual production. Apparently, ripe fruit are preferred for oviposition, but immature ones may also be attacked.

Larval feeding in fruits is the most damaging. Damage usually consists of breakdown of tissues and internal rotting associated with maggot infestation, but this varies with the type of fruit attacked. Infested young fruit becomes distorted, callused and usually drop; mature attacked fruits develop a water soaked appearance.

The larval tunnels provide entry points for bacteria and fungi that cause the fruit to rot. When only a few larvae develop, damage consists of an unsightly appearance and reduced marketability because of the egg laying punctures or tissue break down due to the decay.