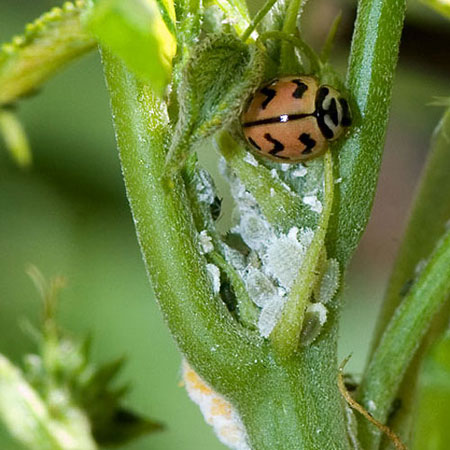 The mealy bug destroyer, Cryptolaemus Montrouzieri, is a small (1/5”) black lady beetle with a tan front end and a voracious appetite for mealy bugs and some soft scales. Cryptolaemus will feed on other insect, mealy bug and soft scales are their main targets. Cryptolaemus is the most commonly used biological control for mealybugs.

Adult female beetles lay their eggs among the cottony egg sack of adult female mealy bugs. One female can lays 5-10 eggs per days. It takes another 12-17 days for these to go through three larval stages and a pupal stage before they become adults. During this the larvae feed on mealy bug eggs. Adults emerge after 7-10 days. After five days, adult beetles begin to lie their eggs, up to 400 yellow eggs during their two month life span. Adults may live up to 2 month.