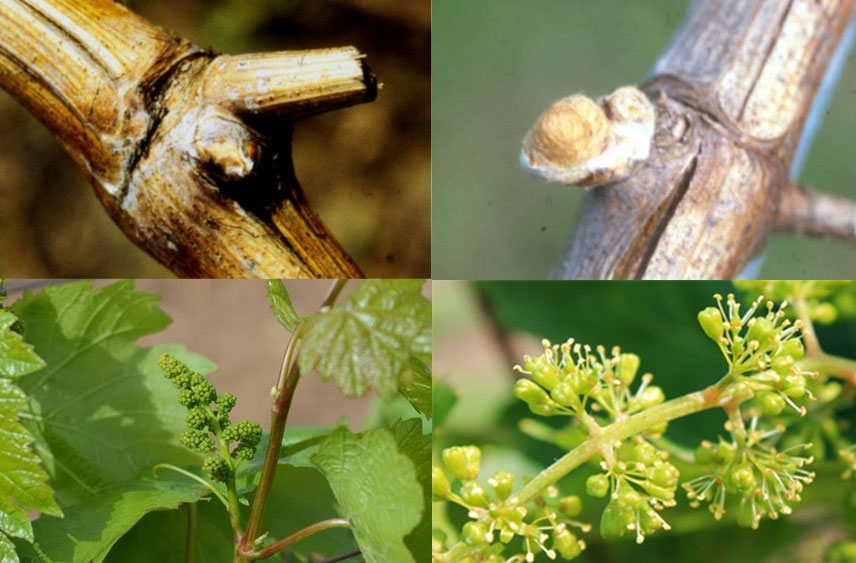 As grapes enter dormancy, the maximum crop potential for the next growing season has already been determined. Each compound bud has the potential to produce three shoots from the primary, secondary, and tertiary buds, and each of the individual buds has a fixed number of cluster primordia. We remove much of this crop potential during dormant pruning, retaining a specific number of buds. Each of these buds has a set number of grape clusters normally ranging from zero to three that was determined during the previous growing season in the month following bloom. While events after bud swell also influence crop size (floret development, fruit set), the number of clusters is set by bud development the previous year.

Normal healthy bud: Normally the Thomson seedless buds have one primary and two secondary bud positions. Most of the secondary positions are vegetative.

Healthy bud with single bunch: Here is a close-up of a healthy Thompson Seedless bud, showing the “bunch” primordium, or inflorescence, and the vegetative tip that will grow into a cane.

Healthy bunch: A close-up of just the bunch.

Zero Bunches: A close up of a vegetative tip in a bud with no bunch, rated “0”.

Sick Bunch: Close-up of a Sick Thompson Seedless bunch. The sick spot grows until the entire bud is dead.

Dead: When most of the bunch is sick, we rate it as “Dead”.

Burnt: A “Burnt” bud results from necrosis at an abscission layer, usually after bloom. It is different from the “Sick-Dead” injury process.

Bud Mite Feeding Damage:A close-up of a Thompson Seedless bunch with bubbly damage by bud mites. Two mites are visible feeding on the bunch. The mites also cause the darkening on the outer tissues. This entire bud will likely die.

Possible Gibberellin Toxicity: Abnormal amount of secondary bud positions with a burnt primary in the centre. Most of the secondary positions were vegetative with excessive amounts of bud mites. The occasional bunch was often injured or destroyed by the mites.